Moyu Guoguan Yuexiao Review: Should You Get It or Not?

Welcome to the full review of the Yuexiao. It is the first puzzle from MoYu’s subsidiary brand Guoguan, which also shows that cube names will just never stop getting weirder.

Well, what’s not weird is the fact that the very first product from Guoguan was a major hit. It received a lot of hype from the community and became very popular in a short time.

It received many excellent reviews and let see if it’s worth all the hype in the Moyu Guoguan Yuexiao review.

This cube is produced by MoYu but branded as GuoGuan. This is their first 3x3 and they have certainly started off with something special. 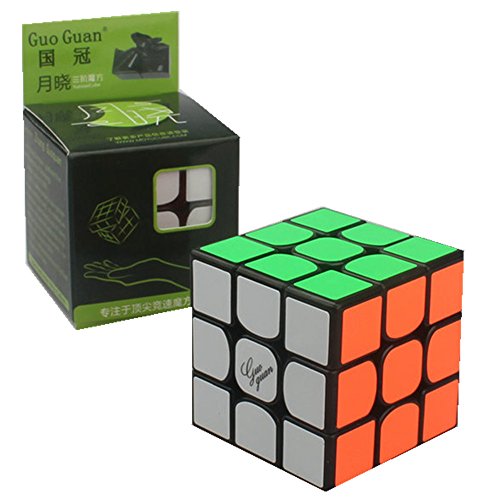 One of the things that really stood out to me when I first took a look at this cube was just how stable it was. This cube is still one of the most stable puzzles I've ever reviewed and definitely complements the light, crispy, and snappy feeling.

It’s a bit hard to exactly pinpoint the feel of this cube. It has traits from the Aolong and the Tanglong, but it doesn't really feel like any one of them.

For Guoguan’s first cube, they've really created a puzzle that feels unique, so kudos to them for that. It feels pretty dry, but boy this cube wants to turn. Add some proper lubes, break it in, and you’re good to go.

I think the Yuexiao has the best corner cutting of any cube on the market currently. It can pretty much cut anything you throw at it, and it does well over 45 degrees for normal cuts and almost line to line for reverse.

It seems as though we've reached the limit for how good corner-cutting can get. We've seen cubes that can cut at ridiculous angles, and we didn't think it would get any better.

But, the Yuexiao proved us very wrong. At any angle, really any angle this cube will cut with ease. Either going one way or so far that it will just go in the opposite direction.

It's at the point where if it can't do a normal cut, it overlaps and just does a reverse cut. I'm honestly not sure if corner cutting can get any better than this.

This cube easily takes the spot for best corner cutting, but we all know that good corner cutting doesn't always ensure lockup prevention.

Taking a look at the mechanism, it's definitely clear where the design of this cube came from. The Yuexiao will remind you a lot of he MeiYing in terms of its feel. Even the mechs are very similar. It’s not that crisp but feels just a little smoother overall.

It’s basically the same with simplified corners and smaller torpedoes. The core is also slightly smaller with smaller screws in the modified center design that seems to increase stability.

I think reducing the tracks has allowed the cube to be much smoother and less bumpy.

Out of the box, you might feel a very small sandy feeling.

But, after doing a couple of hundred solves and lubing it, you won’t notice the sandy feeling anymore, and it's very smooth and fluid when you turn.

This is also a very light cube that's similar to the MeiYing, and one thing that is unique to the Yuexiao over the MeiYing is the octopus core design. It looks a more like a normal core with reinforced arms.

Instead of using a nut to tension it like the Gans 356, they've used screws. Personally, I'm not a fan of these octopus’ cores at all. I find the cubes much harder to tension when I don't have a visual frame of reference for the screw.

You pretty much have to do a complete tuning based off feel, and I'm not the best at doing that. I am happy to see that they used to screw instead of a nut like Gans.

It also looks like MoYu has gone back to the original shades that they were using on puzzles. If you weren't a huge fan of the ones on the Aolong GT, the normal shades are back. If you'd like to replace them with your own scheme, you can find custom fit stickers for the Yuexiao.

If you add proper lube to this one, this will become very fast. You need to put some thicker lube to maintain the pace. If you are that type of person that don’t prefer fast cubes, try tensioning it a bit. Otherwise, it will make you overshoot.

Quick Tip For Properly Lubing This Cube: If you lube it with Traxxas 50k, it will become very fast. You can do a follow along and lube it again with Cubicle Gummy Silicone Lube; it will become more controllable.

With all these features, there is a couple of things that bother me. First of all, it’s very fast. Even with its awesome corner cutting, if you are an aggressive turner, this cube won’t save you from it.

There is really not much to dislike about the Yuexiao. It checks off nearly every box to be a great cube. Overall, I feel that this cube will be great for a large audience of cuber's and this will become many people's mains.

It’s one of the best 3x3’s right now. It’s a tad too fast, but I definitely like feel of it. That’s all I can say for the Moyu Guoguan Yuexiao review. Will this be your new main for 3x3’s?