Qiyi Valk 3 Review: Is It Worth The Hype?

The Valk 3 was designed in collaboration with QiYi and speedcubing megastar Matk Valk. This cube is 55.5mm wide and weighs 82.3g and comes packaged with a half-bright color shade from QiYi.

This one was designed by QiYi and tested and approved by Mats Valk. It comes in a nice black box complete with a variety of pamphlets. You’ll also find a nice personalized message from Mats.

The Valk 3 is a special cube that bears the name of a professional speedcuber. In the early stages of its release, the cube was famous for 5.13 ER single and two consecutive podiums at large competitions, Euro championships and US Nationals 2016 by Matz.

Now, this cube has been used by a number of accomplished speedcubers including Lukas at his 7.05 average.

There is plenty to talk about this cube, stick around as I go through the Qiyi Valk 3 review. 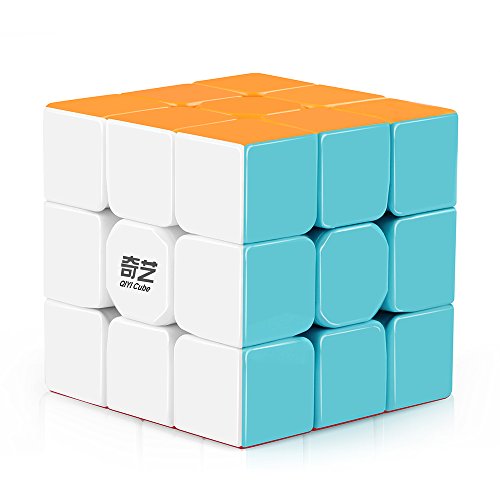 On the outside, the Valk 3 has many design elements that are now fairly common in high performance three by threes. It has squared off corners, crescent edges and somewhat square centers with rounded sides.

Many have pointed out that this cube bears resemblance to the Yuexiao, while some similarities are there, these cubes perform very differently, and we'll explore those differences later in this article.

Opening the center cap, you'll quickly notice that the spring coils directly underneath the head of the screw. This creates easier access to the cube’s hardware for lubing purposes.

Looking at the pieces, we can find groove/tracks on both the edges and corners. The edge has a pretty prominent hole near the torpedo, and I really have no clue what this is, but it’s there.

The core is your traditional green QiYi core, but the lack of center stocks makes the center fall down a bit if the cube is disassembled, which is pretty frustrating.

The following center is what makes the cube difficult to tension when the cube is disassembled.

The Valk 3 has excellent corner cutting both reverse and forward. But you guys pretty much already knew that just like every other 3x3 these days.

Lockups are very minimal on the Valk. It's an extremely stable and well-performing cube. At reasonable tensions, the cube does not have a corner twisting problem.

Out of the box, the Valk 3 is fast and crunchy, but after breaking, the cube smooths out a bit and becomes a lot more controllable.

The cube has a compact feel. It's not that much smaller than a standard 3x3, but it's definitely something you're going to notice while solving.

In contrast to the Yuexiao which is often compared to, the Valk feels more rigid and clacky. The Yuexiao is more flexible and has a softer feeling.

I understand that the designs are similar but they really don't perform the same and there's a very clear difference between the both of them.

The stock stickers are labeled as the QiYi half bright shades, but they're pretty much identical to cube smith half brights, which if you guys didn't know, were the shades that everyone used to use before the cubicle stickers became popular.

MoYu posted some photos of the Yuxiao and the Valk 3 next to each other, and the mechanisms look pretty much the same. But QiYi then went on to post some more photos and explain some more of the subtle differences between the two cubes.

And, of course feeling a broken in Yuxiao and a broken-in Valk 3, they're pretty much nothing alike.

The Valk 3 is pretty much entirely smooth. There are no bumps or anything along the turn. It's just completely smooth. It's also very light and very fast. Very little effort is required to start a turn. So, the cube is best suited for a light, accurate turn style.

When turning fast, the cube does become a bit clicky and has a very rigid feel. In general, the cube is easy to control on tight tension settings, but sometimes you may lose control and overshoot, causing a lock-up.

Overall the performance of the Valk 3 is really good, but there are just a few things that bug me about it that I'm just not a huge fan of.

First of all, the size fifty-five point five millimeters is just a little too small for me. I do prefer 57-millimeter cubes mainly because my hands are really big and I actually found my fingers getting caught on the layers sometimes.

Not that big of a deal though, but it's just something I noticed. Second is the completely smooth turning.

I prefer cubes that are a little bit bumpier and a little slower. The cube just glides so effortlessly; it's kind of hard to control sometimes.

This isn’t a fault on the cube; it’s just my own turning style that’s causing this. It is something that you’ll get used over time, and you’ll start enjoying it sooner than you’ll realize.

If the cube feels too fast for you, you can slow it down with a bit of Traxxas 30k on the core and Lubicle speedy on the pieces. It’s a mixture that adds stability but does not sacrifice too much of its original speed.

I really like this cube so far. It’s very promising. The turning feels very contained, and the cube has a perfect level of control. Beginning a turn requires very little force, and at the same time, there are no issues with overturning.

The Valk is a very versatile cube, and you can set up this one to fulfill the needs of a wide variety of turning styles. And, it’s also the main cube of Mats, so you can’t go wrong with this one.